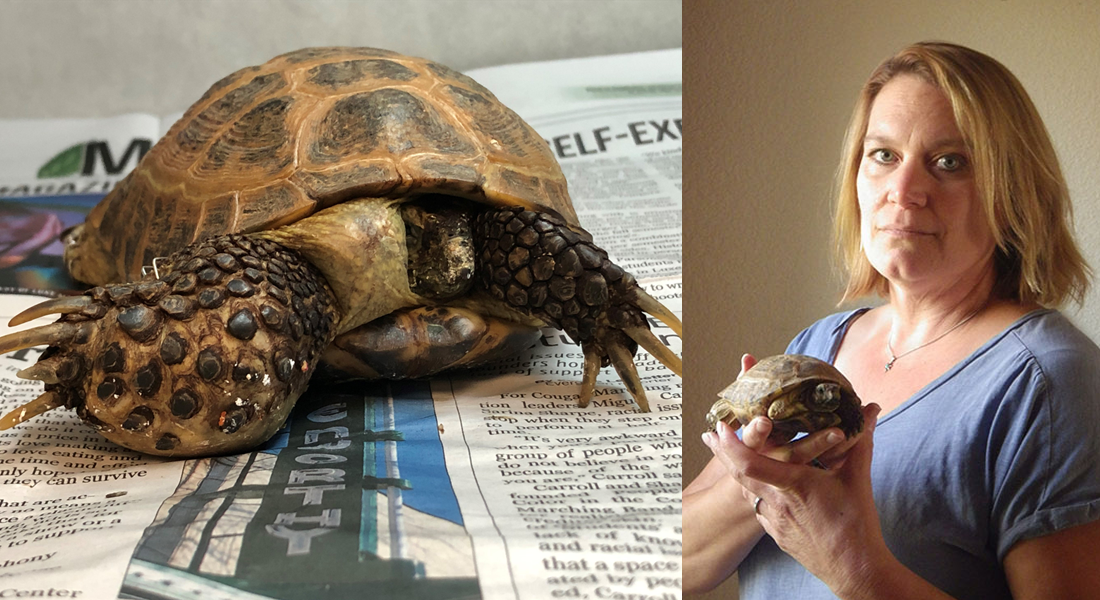 Take it from The Hulk, a 25-year-old, 5-inch long Russian tortoise that in many cases, can fit right in your hands.

The Hulk’s front right leg was so swollen he could barely peak his head out of his shell when he arrived at Washington State University last month, let alone get around.

“He is getting around well now,” said Terese Meyer, who runs Kennewick-based Northwest Tortoise. “He’s eating on his own, he is bright-eyed, adventurous; he is ready to live.”

That wasn’t the case just a few weeks ago when Meyer brought The Hulk to WSU’s Veterinary Teaching Hospital with two severely swollen right limbs.

Following a biopsy, exotics veterinarian Dr. Nickol Finch diagnosed The Hulk with tumorous calcinosis, a rare condition where calcified masses grow and spread under the skin. In The Hulk’s case, those masses, which may have been able to be treated if they were caught months earlier, grew so large it affected his mobility.

Ultimately, Dr. Finch had no choice but to amputate the leg.

“It’s always the last option, but it is an option,” Finch said. “We didn’t want to go that route, but we did for the sake of this tortoise and his overall quality of life.”

Meyer agrees, had the tortoise been brought to the veterinarian sooner, the amputation could have likely been avoided.

Now the 25-year-old reptile is bright-eyed, eating and happy with hundreds of tortoises as he recovers at the only nonprofit tortoise rescue in the Pacific Northwest – Meyer’s home.

“I try not to tell people how many (tortoises) I have,” Meyer said. “I’m kind of weird to start out with already.”

Currently, Russian tortoises are one of the trendy tortoises on the market. They can live up to 100 years in the wild, but due to improper care by owners, it is not likely for them to live past age 20 as pets. Meyer said many don’t even live a year.

A complete list of health information and other resources on how to properly care for a variety of common pet tortoises can be found on the Northwest Tortoise website. The materials are for novice or experienced keepers.

Finch and Meyer stress tortoise owners to pay close attention to odd behavior or health concerns in their animals.

“We don’t have a good handle on how pain is sensed in reptiles, we just have to assume they do feel it,” Finch said. “Oftentimes, by the time you recognize a symptom it is already a serious health issue.”

As for the Hulk, he’s not quite out of the clear yet.

His back right leg still has some calcifications that will be removed in the coming weeks.

Finch and Meyer are still unsure what caused the tortoise’s condition, but they are certain he is better off than he was. Meyer said he was refusing to eat and she didn’t think he would have lived three more weeks without the surgery.

“What’s most frustrating is this may have been avoidable,” Meyer said.

When Alex Crea found his two-year-old bearded dragon, Viserion, playing with a marble on Halloween, the last thing he expected her to do was eat it. 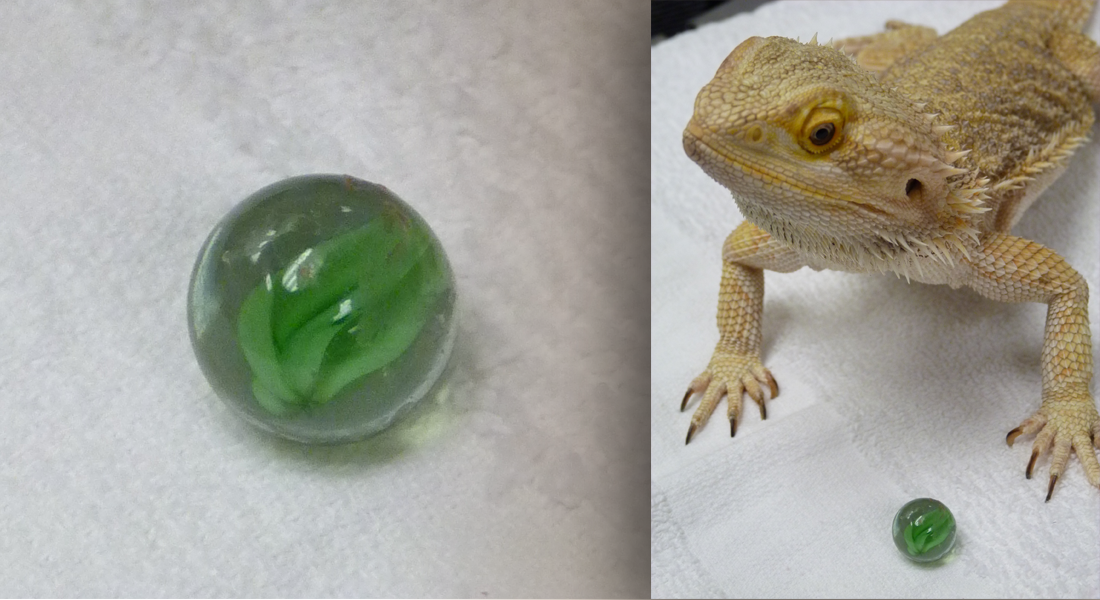 “I saw her licking it and I thought, that’s kind of cute. Then, right when I went to pick it up, she swallowed it,” Crea said. “My first thought was I need to get her to WSU. No one else specializes in bearded dragon care.”

Crea, who is from Lewiston, jumped in his car and made the 40-minute drive.

The fear was that as the marble tried to leave Viserion’s stomach, it would cause trauma to the tissues and potentially block her gastrointestinal tract. If left untreated, it could kill the young beardie.

“We knew we had to go get it,” said Dr. Marcie Logsdon, veterinarian on the case.

On palpation, Logsdon said she could feel the marble still in the stomach. She went after it with forceps but could never guarantee she was grabbing only the marble and not part of Viserion’s stomach.

It would take surgery to remove the marble.

Dr. Logsdon performed a gastrotomy, where she anaesthetised the reptile and made a one-centimeter long incision right where the marble was in the stomach.

“It was right there. We sutured her up and she was eating that evening,” Logsdon said.

The entire procedure lasted about 20 minutes.

Viserion is doing much better now.

“She’s doing good. She’s laying on her cold side of the tank to keep her stomach cool,” Crea said. “She is still as quirky as ever.”

For ducks, pennies don’t bring much luck — a one-cent coin could actually cost them their life.

That was the case for Wazzu, an Indian Runner duck who showed up at Washington State University’s Veterinary Teaching Hospital this spring struggling to walk, losing weight fast, and feeling ill.

“I did my best to treat her, but she wasn’t making much improvement,” Wazzu’s owner, Heathear Bloom said. “I saw online someone said their duck had similar symptoms and had swallowed a metal washer. I thought an X-ray may reveal the cause of her condition.”

So, Bloom hopped in the car and the two drove from Latah, Wash., to WSU.

“Sure enough, there it was as plain as day,” Bloom said.

The radiograph showed Duck, later named Wazzu for the work of WSU veterinarians, swallowed a coin and it was stuck in her gizzard.

Due to her symptoms and knowing the foreign body was likely a coin, Dr. Marcie Logsdon, the lead veterinarian on the case, suspected the culprit was a post-1982 penny.

“She was showing signs consistent with zinc toxicity and pennies minted after 1982 contain high levels of zinc,” Logsdon said.

Despite efforts by WSU’s Exotics Team to remove the object via endoscopy, Wazzu would ultimately require surgery to have the item removed.

Bloom said at that time she wasn’t sure if she could move forward with the procedure.

“As much as I wanted to save this silly bird, I just couldn’t afford the estimated cost,” she said.

Logsdon recommended WSU’s Good Samaritan Fund,  which was setup by WSU veterinary students in the mid-1990s  to help animals in need of special care.  Since that time, more than 1000 caring people have given to support the Good Samaritan Fund.

“I got a call later that they had approved $350 to be put toward the surgery,” Bloom said. “I was thrilled because I didn’t have high hopes. Most people don’t think of poultry on the same level as the family dog or cat, so I assumed she may be turned down for the surgery.”

Wazzu received the surgery the next day.

“We made a small incision into her ventriculus (gizzard) and were able to remove it,” Logsdon said. “It was a penny, but it didn’t look much like a penny anymore.”

The penny was black, corroded, and riddled with holes from an estimated two to three weeks of Wazzu trying to digest it. There was no sign of any writing, copper, or Abraham Lincoln.

“There was really no telling it was once a form of currency,” Logsdon said.

Logsdon said the more Wazzu’s body continued to digest and break down the coin, the more toxic zinc she became exposed to, and the sicker she became.

She said, ultimately, the swallowed coin would have killed her if it wasn’t removed.

Besides a small scar now hidden by feathers, the two-year-old is living the best days of her life now.

“She is doing very well,” Bloom said. “She did a lot of her recuperating in the front room where she watches TV with me from her bed.”

As for the penny, it sits on a shelf in Bloom’s home.

“I show it to people when I tell the story of my coin-consuming avian friend and the crazy predicament she got herself into,” Bloom said.