Jenny, a 3-year-old quarter horse from Spokane, Wash., ingested one of the most toxic substances known before she arrived at Washington State University’s Veterinary Teaching Hospital last month. 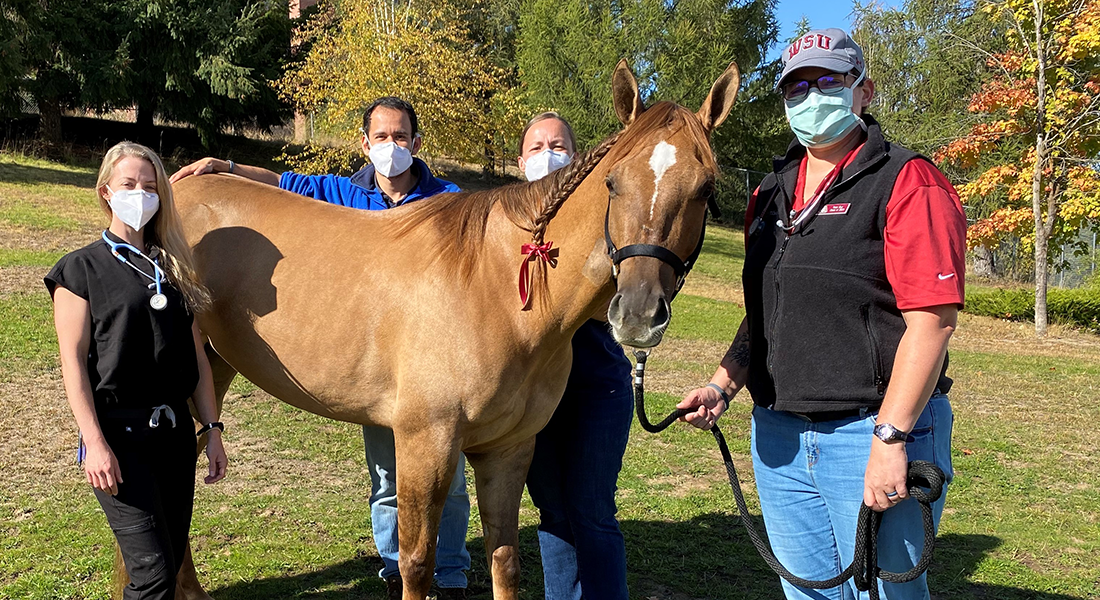 Today, three weeks later, the horse that may have been just a few bites away from death, has now headed home.

Jenny was poisoned by Clostridium botulinum, a deadly bacterium that produces the neurotoxin responsible for botulism.

When ingested by horses, the neurotoxin attacks the neuromuscular nerve junctions and blocks the release of acetylcholine, a chemical that tells the peripheral muscular system how to function; the condition is rapidly fatal and often leads to respiratory arrest.

“If enough of the toxins bind to enough neuromuscular junctions, the peripheral muscular system will eventually not get the message to breathe,” Jen Gold, lead veterinarian on the case, said.
Due to this, the bacterium is considered by the Centers for Disease Control as a bioterrorism threat due to its toxicity.

“She didn’t get a huge dose,” Gold said. “A higher dose and she wouldn’t have made it.”

Like in most botulism cases, when Jenny arrived at WSU, she was unable to eat or swallow, her abdomen was bloated, she was weak, short-strided, and her pupils were dilated.
A test of Jenny’s stomach contents came back positive for botulism type C.

Gold treated Jenny with an antitoxin for botulism type B (the only antitoxin available to treat the condition) and penicillin. The horse was provided food via an IV until she was able to eat and drink again.

Gold said Jenny is one of the lucky ones.

In nearly 20 years she’s seen about as many Botulism cases; this is just the second horse that has ever survived.

Gold said horses often die within 72 hours of ingesting the toxin and consulting a veterinarian sooner than later always gives the horse the best chance at survival. Dilated eyes that are unable to contract are often the condition’s biggest giveaway.

“This case was really about her owner getting on it and bringing her to us,” Gold said. “She likely would have died otherwise.”